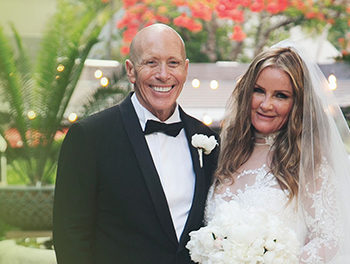 Perhaps the most rewarding perk for a dating site like EliteSingles is witnessing the fruits of helping people start a relationship and discover love. Every so often, we hear back from some of the people who’ve met through our platform, something that truly fills us with joy.

The most recent EliteSingle to contact us is a well known figure in Australia, no less for being one of the country’s leading plastic surgeons. With a career spanning 25 years, Dr. Malcolm Linsell entered the national limelight after his work and relationship with Wesley Koni were made the subject of a Channel 9 60 Minutes documentary.

Over the course of two decades, Malcolm helped reconstruct Koni’s face and upper body after he was left severely disfigured by a fire in his family’s grass-hut home in Papua New Guinea. “The experience with Wesley has had a profound impact on my career and life,” says the surgeon, “I was privileged to witness how my work had made a long term difference, it was confirmation that what I do brings about a positive change in people’s lives.”

READ MORE: Senior and single? Find out why EliteSingles is the go-to site for older dating.

Following the show, Malcolm was approached by New Holland Publishers and asked whether he’d be interested in penning his biography. “I’d always wanted to write yet I wasn’t sure if the timing or circumstances were right,” he reveals, “however, New Holland felt that if I was honest then my life circumstances might be of interest to others, hopefully this is the case.” READ MORE: Find out how EliteSingles can help you find love and life after divorce.

Suffice it to say, Malcolm’s story is far from dull. Having weathered a divorce he describes as “the worst thing to ever happen to me,” and overcome a minor stroke, the Sydney-based doctor isn’t short of tales to tell. At the more positive end of the spectrum Malcolm met his current wife, Kim, through EliteSingles! Eager to find out more, we had a quick chat with the man himself!

If you’re keen for an inspirational and moving read, we can highly recommend his book too.

Hi there Malcolm, we were so happy to find out that you met your wife through EliteSingles. How did you end up using us?

I had used other online platforms before with mixed success. I was reading the sports section of the newspaper at Melbourne airport when I saw an advertisement for EliteSingles. I was intrigued and after a little more research discovered that there was an upfront payment and that EliteSingles matched people according to their profiles. I liked both of these scenarios because if people pay money upfront they are generally serious about relationships. Secondly I thought that matches from the company might save me some time rather than spending hours looking at profile after profile as per other sites. So I joined.

We’d also love to know a bit more about how your relationship with your wife flourished! How long were you members before connecting with each other?

I had been on the site for a few weeks and was online at the end of the day, whilst in Mackay QLD. Kim was watching television in Sydney and saw an advertisement for EliteSingles. She had a friend who had recently met and married someone she met online so Kim thought she might give EliteSingles a try. She was disappointed that it wasn’t like Net-a-Porter and instead she was required to upload her profile. This she reluctantly did and Kim and I were instantly matched. I immediately made contact with her and after exchanging a few texts, she agreed to allow me to call. We spoke briefly and I said I would call the following night when I was back in Sydney.

The following day, Kim was matched with quite a few others. She thought she may have to engage a personal assistant to manage them and promptly took herself off the site! I was the first and only person she met from her online dating experience, which lasted about 8 hours. I called her from the platform of Sydney Central railway station the following evening and we arranged to meet for lunch the following day.

What was it like meeting in person for the first time? How did you feel beforehand?

Kim is a dentist and I was excited to be meeting another professional. When she breezed into the restaurant I was taken by her glamour and her confidence. She was at ease with herself, with me and easy to talk with. We talked about books we had read and early on it was clear we had similar values. And we laughed together, often. She was fun, intelligent and beautiful. She still is!

Where was your first date?

Perron’s in Double Bay. She had the chicken salad, I had the nachos.

When did you know the relationship was something special and how long did you date for before deciding to tie the knot?

Before we met, Kim had booked a Mediterranean cruise for herself a few months hence. I invited myself along. Spending all day, every day together early on is a test for any relationship. During our stay in Barcelona, I thought it may be worthwhile to wander through Tiffanys. Kim feigned reluctance however it was already clear to me that she was something special. Over the next 12 months, we visited a few more Tiffanys stores and Kim’s reluctance seemed to be diminishing each time. We became engaged on July 4, 2015, about 18 months after our first date. I proposed on one knee, between main course and desert at the Bennelong restaurant at the Sydney Opera House.

Were you ever sceptical of dating websites before using EliteSingles?

One of my friends had met and married through an online dating site so I knew it could work. After 23 years of marriage, I also found I was hopelessly out of touch finding women to go out with. If I went into a bar, I had no idea how to interpret any sign from a woman. If she smiled once, did that mean anything? What if she smiled twice? Online dating for me was therefore a safe option for getting back into the dating game. Early on however, I learned that online profiles and even photographs, only occasionally are a true reflection of the person that I am communicating with.

What were the factors that made you choose EliteSingles? Did you find that it juxtaposed with your lifestyle?

Paying money upfront tends to attract those who are looking for genuine relationships. In my previous experiences I had spent countless hours looking through profiles with limited success. The fact that Elite Singles matched the profiles made the whole process much more effective and efficient.

Would you recommend EliteSingles to single colleagues and friends?

I have and I do highly recommend EliteSingles to my friends and colleagues. If they are seriously looking for a genuine relationship, EliteSingles is the go-to site.

Lastly, what are your plans for the future?

This is the best time of my life. I am married to a woman who is perfect for me. All four of my adult children are each outstanding individuals who are either studying or embarking on their own careers. I love my profession and to be able to make a difference in people’s lives on a daily basis is humbling and totally fulfilling. I have no plans to retire and if people enjoy the book, perhaps there will be a sequel.