Average number of monthly registrations in Australia and New Zealand 2018.

Our members hold an above average education.

Thousands of singles find love through EliteSingles every month. 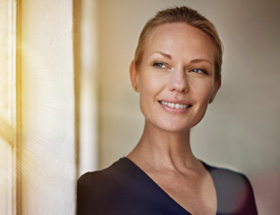 As one of the leading dating sites for mature singles in Australia, there’s no shortage of older women dating younger men on EliteSingles. Our users’ profiles are manually verified by our customer service team so that we can ensure our members are serious about using our premium service to look for long-lasting love. That means our site is an ideal tool for finding a serious romance with a younger partner safely and securely.

It’s been nine years since Newsweek famously proclaimed 2009 as the year of the cougar. The now well-known term is a slang coined to define 40-plus women with a predilection for younger gentlemen.

Although the US-based magazine reasoned that the cougar-craze was a fad destined for cultural oblivion, the article offered up an intriguing explanation for the newfound popularity of older woman/younger man relationships. Since then, there have been many think pieces dedicating to the phenomenon that is older women dating younger men.

These articles that the main driving force that brought cougars from the wilderness was Hollywood. Indeed, shows like Sex in the City paint a more sophisticated picture of a mature woman’s sexuality. Whereas sitcoms like Cougar Town had a less than a mature approach to these relationships. But ever since the 1967 film The Graduate solidified it as the ultimate fantasy for young men and countless parodies have followed in its wake.

Off-screen, these relationships have flourished:

The very word ‘cougar’ is most certainly moot. Without getting too entangled in semantics, EliteSingles resident psychologist, Salama Marine, is quick to discuss this point. “Prejudices have a tendency to stick, even if society is changing,” she says, “calling an older woman a cougar isn’t meaningless, it’s a way of defining her as a predator who’s only interested in hunting down younger prey.” Despite some of this negativity, the reality of older women dating younger men is actually long-term stability according to recent studies.

When ‘cougardom’ was becoming known in mainstream media, social scientists set out to explore the relationship between older women dating younger men.

In their 2006 study, the University of Maine interviewed eight married couples where the wife was between 10 to 17 years older than the husband2. Their findings revealed that whilst both partners were content with their relationship, they still worried about how others judged them. Also, women expressed concern over the prospect of ageing and whether it would affect their partner’s attraction to them.

READ MORE: Happily in an older woman/younger man relationship? Here’s how to make it last.

They reported that “vast age differences, especially in woman-older relationships, clearly violate the norms of this society”. When we look at how tabloids react to older women dating younger men, we can see this subconscious judgement in effect but the fantasy doesn’t match the reality. Older women dating younger men is far more common than previously thought, in a recent study by McGill University it was found that approximately 13 percent of sexually active women between 35 and 44 have slept with a man at least 5 years their junior.3

Not only did they discover that middle-aged women who’d been previously married were more likely to seek a younger mate, they also showed that older woman/younger man relationships are rarely brief flings. On average, when an older woman and younger man start dating, the relationships last two years. So, if women from all walks of life are ignoring the stigma and are happy romancing younger men, it begs the question; what’s the appeal?

The pros and cons of dating a younger man

You don’t need to be too imaginative to picture what the benefits of an older woman/younger man relationship might be.

For EliteSingles resident psychologist, Salama Marine, one of the biggest draws has a lot to do with compatibility. “When an older woman looks for a younger partner, she’s probably quite comfortable with her sexuality,” she explains, “it’s likely that she’s already been married or had children. This means that she’s on the same wavelength as her younger companion, who’s probably not entertaining the thought of starting a family.”

This can be a breath of fresh air: “It enables older women to regain a bit of youthfulness with their partner,” Marine adds. A young admirer is a welcome alternative to the more vintage male, especially in the spontaneity department. The chances are that a younger man hasn’t had the time to accumulate the emotional baggage that comes with growing older. Younger men enjoy a relationship with an older woman as well. Under the tutelage of a more mature acquaintance, a young man can learn a lot about life and its meaning, both mentally and physically.

Above all, the time old adage ‘age is just a number’ couldn’t be more appropriate for older women dating younger men to bear in mind. And whilst such relationships are still bedevilled by Freudian taboos, mature women shouldn’t feel dissuaded from starting something with a younger man because society dictates otherwise.

In the words of Coco Chanel:

“You can be gorgeous at thirty, charming at forty, and irresistible for the rest of your life.”

Of course, while older women dating younger men is a phenomenon which can bring much joy if you’re looking for a real relationship, it’s important to choose a site that can offer you support and a quality service, not to mention one that can introduce you to interesting members! We’ve found three reasons why you should try older women dating with EliteSingles: