Infatuation vs. Love: what is the difference between love and infatuation in relationships? Relationships arouse strong emotions and responses, especially in the early days when you are trying to figure out if the apple of your eye is the love of your life or an irresistible but transitory infatuation. To help you find your way through the maze of the early stages of dating, we line up infatuation and love, and match them in a contest for your heart.

Signs of infatuation: the whirlwind romance

The definition of infatuation is characteristically understood as a passionate but short lived phase of a relationship. It involves intense but ephemeral feelings which, for those in the throes of infatuation, can be all consuming. When in an infatuation state the rest of the world tends to disappear and is narrowed to the scope of this one seemingly perfect person1.

In terms of how it feels, infatuation is the breathless, heart racing high which people crave with its heady dose of dopamine, testosterone and adrenaline. This leads to the tantalising euphoria and excitement. Scientific research has shown infatuation can in fact create a similar chemical reaction in the brain as a drug induced high2. Due to these intense feelings which infatuation evokes, it is often confused with love, but there are significant differences between love and infatuation.

What is love: the real deal

Love tends to be a more steady state of affairs. Although it is nearly impossible to capture in a few short words, love can be understood as a deep level of connection, acceptance, bonding and attachment with another person. There are many different interpretations, kinds of and definitions for love; however one can view it as a committed union between two people which transcends everyday life challenges, while being based on reality.

In terms of the physical reaction of love, physicist and science writer Jim Al-Khalili explains that in true love the brain releases a wider collection of chemicals for attachment and bonding including serotonin, oxytocin and vasopressin3. It is not to say that love does not have its own challenges but it is an emotion that has deeper roots and a solid foundation that take time and commitment to develop. 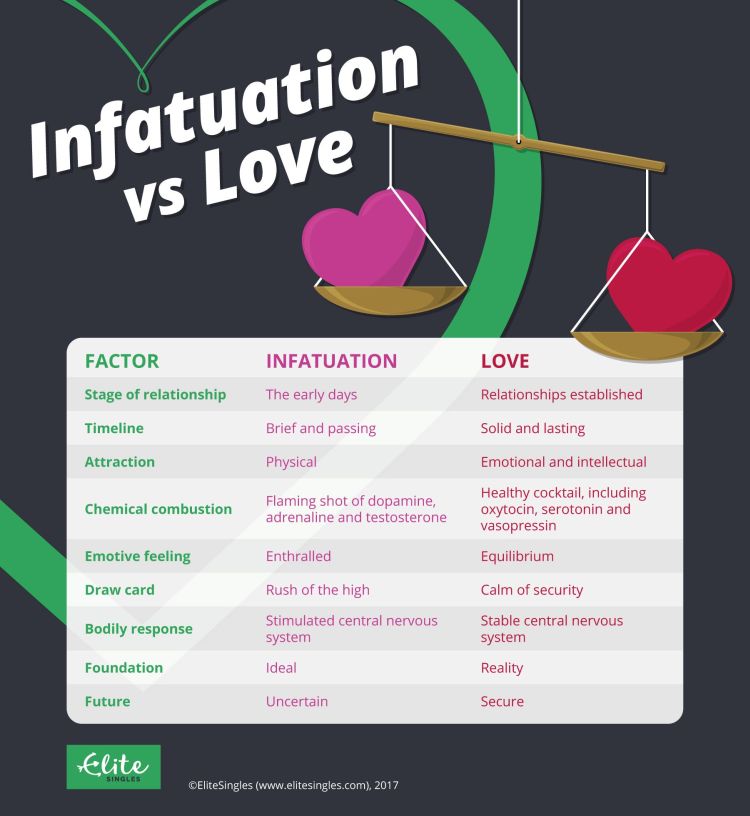 Infatuation vs. love: the contest

“Infatuation is when you find somebody absolutely perfect. Love is when you realise they aren’t perfect and it doesn’t matter”, Anonymous.

So in one corner we have the alluring and intoxicating infatuation, which promises the bliss of rose tinted glasses, butterflies and the passion of puppy love. And in the other corner, we have the security of a pragmatic, familiar and encompassing emotion of love. Are you battling to evaluate where your relationship falls along the spectrum? Here we layout an outline of key difference between love and infatuation from a holistic viewpoint looking at physical, psychological and emotive factors.

Stage of relationship: Infatuation usually takes place in the early, first stages of a relationship, while love develops and grows as the relationship is established.

Timeline: Infatuation is not a state that can be maintained over long periods of time, and so is usually a brief and passing timeline in the beginning of liking someone. Love, on the other hand, has the staying power to last a lifetime. It should be noted that there is no set time frame for either state but can differ from relationship to relationship, with infatuation expected to last anything from two weeks to two years.

Attraction: Driven by the heady mix of hormones and the fresh appeal of a new date, physical attraction is the driving force behind infatuation. Whereas, as there has been time to get to know each other and experience each other’s strengths and attributes, the real attraction between two people who love each other extends to an emotional and intellectual level.

Chemical combustion: The chemical combustion which takes place in your brain as infatuation takes over include a strong shot of dopamine, adrenaline and testosterone. However, in love, as attachment and bonding take place a cocktail of chemicals are released which include the calming effects of serotonin, and the bonding hormones oxytocin and vasopressin. Infatuation produces the neurological responses of euphoria, addiction and overstimulation, while love chemicals trigger the neurobiochemical responses of safety, proximity, happiness and reduced anxiety4.

Emotive feeling: As a result of these chemicals the emotive feeling you experience in infatuation is one of total enchantment with your fairytale. However, in love, it offers a sense of equilibrium, as you now have the knowledge and equality established to share a balanced relationship.

Draw card: The obvious draw card of infatuation is the walking on sunshine high it offers, which is widely accepted as one of the greatest feelings in the world. Love’s enduring trump card is the calm security that a committed relationship provides.

Bodily response: The bodily response is also based on the mentioned chemical reactions triggered in the brain. The physical response to the rush of infatuation stimulates the central nervous system and results in the symptoms of “love itch”, such as sleeplessness, loss of appetite and lack of concentration in areas other than your darling. While as your neurotransmitters settle in lasting love, your nervous system is stabilised and your body functions within a normal spectrum of response.

Foundation: Weighing up these factors, the foundation upon which infatuation is built is the ideal, for this blissful moment in time, the way you view your object of affection is idealised perfection. However, when it comes to love, it is more firmly rooted in reality. You know their flaws and love them anyway.

Future: To summarise the future of infatuation can be uncertain, while looking to the future of true love, there is a much greater sense of security.

Read more: Still unsure, take our love and infatuation quiz to see what kind of relationship you are in?

Lust is another factor that often comes into the infatuation vs love debate. Which category does it fall into? It is easy to position lust in the infatuation continuum, as it has been shown to be driven by strong elements of physical attraction. However, lust is an element of dating one should nurture through long standing relationships to keep the spark alive. Lust is understood as the sexual desire element in a relationship, and thus it could be argued that it should stand on both sides of the infatuation and love fence.

Read more: Want a know more about love and lust? Read our in depth discussion here.

Can infatuation turn into love?

So can infatuation turn into love? The short answer is yes. As your relationship moves forward, elements of both love and infatuation fuse together to build a happy and fulfilling relationship which has both the excitement of physical chemistry and the security of familiarity and commitment. Infatuation is also known as the honeymoon period and it is when this blissful adoration starts to wane that the real work of love begins to build a lasting relationship5. If you and your partner are committed to making it work, harness the energy of infatuation to build a solid relationship of love.

[3]Jim Al-Khalili, writing for The Guardian, 2012. What is love? Five theories on the greatest emotion of all. Found at https://www.theguardian.com/commentisfree/2012/dec/13/what-is-love-five-theories

[4] Jan Rostowski, 2010, written for the University of Finance and Management, Warsaw, Poland. Bioneuropsychology of Love – Selected Aspects, found at http://www.euhedu.pl/media/_js/filemanager/userfiles/wydawnictwo/Polish_09/Bioneuropsychology_of_Love_Selected_Aspects.pdf

EliteSingles » EliteSingles Magazine » From Single to Couple » Infatuation vs. Love: what is the difference between love and infatuation in relationships?